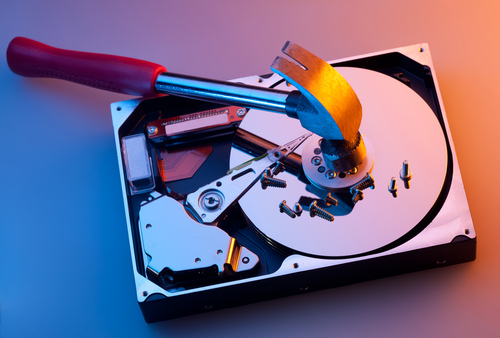 Instead of taking a chance that your data gets into the wrong hands, let Royal Document Destruction help you with certified hard drive destruction to ensure that the data cannot be recovered.

How to Destroy a Hard Drive

To prevent hard drive identity theft, you need to destroy your hard drive so that it no longer functional. Many people think that deleting all the data is enough for identity theft protection. However, deleted data is recoverable, even if it has been overwritten.

Some programs claim that they can erase all of the data on hard drives and other digital media. However, hackers and identity thieves can still recover enough bits of information – sometimes enough to get that one piece of information a thief needs to complete a profile to steal an identity.

The best way to destroy a hard drive is to have it professionally shredded. However, if you must do it yourself, you need to render the platters inoperable.

If you need to know how to destroy a hard drive yourself, you have several methods available. You can soak it in acid, which is quite dangerous if you happen to spill the acid, or you can beat it with a hammer and drill into the platters. However, there is still a chance that you don’t bend the platter enough, and it will still spin.

One of the better methods is to wipe the drive, take it apart and sand down the platters. Then, smash the platters with a hammer. Drilling holes in the smashed pieces help make putting the drive back together useless. The sandpaper wipes out the sectors and hopefully destroys the data that was left after you wiped the drive.

Hammering breaks it into pieces so it won’t spin. And drilling it is an extra step that hopefully dissuades someone from trying to put the pieces together in an attempt to get the data. Other methods are not feasible to prevent identity theft.

If someone accuses a business of allowing information to be stolen, it might avoid fines if it can show that their system was not hacked or that an old hard drive didn’t show up in a thief’s hands. However, if investigators do find that data was stolen through another method, the business could still face steep fines.

For every method that you can employ to reduce the risk of identity theft, the less chance you’ll have of facing the issue of dealing with it.

After upgrading your hardware or replacing a failed hard drive, you need a way to get rid of it. Contact Royal Document Destruction to discuss shredding services for documents and digital media, including hard drives.

Get in Touch With Us